Having Anissa free of seizures for an entire year enabled her such freedom to run, play and learn.   So, when seizures returned, due to the flu she contracted while at school, our faith was sorely tried.  The unpredictable effects of the seizures required someone to be with her at all times, whether awake or asleep. It was during this time that several new drugs for epilepsy were approved by the Food and Drug Administration (FDA), bringing new areas for us to explore.

After the second dose of the drug, Clonopin (clonazepam), Anissa went wild, kicking, screaming and thrashing her arms to strike anything that moved.  It was necessary for us to physically restrain her until such actions subsided.

When a drug alleviated one type of seizure, other types would manifest.  Behavior problems, fearfulness and confusion resulted. Another example came when Mysoline (primidone) was given to her on a trial basis.  One day, I heard Anissa’s terrified voice coming from the bathroom. Rushing in, I found her standing on top of the toilet seat looking around in a bizarre state of confusion.

Whether from the drugs or the seizures, only God knows for sure, but it became increasingly difficult to cope with Anissa’s behavior.  She became self-destructive, pulling out her hair, picking out her toenails, etc., and in sudden bursts of rebellion and anger destroyed anything in her sight.  The perverse behavior became so magnified that, in comparison, the seizures now seemed minor.

Whenever Anissa accompanied me to a store, I found myself thinking that it would be easier if her physical features pointed out to others that she was mentally handicapped.  By the “dirty looks” I sometimes got, I realized that to a casual observer she must have appeared to be just a “spoiled brat.” The words that Anissa’s neurologist spoke years earlier kept coming to my mind, that she would require very strict discipline — to the point that others not understanding the situation would consider the discipline abusive. 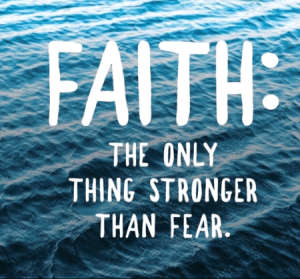 My faith was challenged over and over again.  I had to overcome the fear of taking Anissa out in public and also stop worrying about what other people might think.  I learned from experience that when I allowed fear to overpower me, it didn’t take long for Anissa to win the battle! Therefore, I made up my mind that even if she needed physical restraint to the point of my actually holding her down on the floor while in a store to keep her from destructive behavior, then I would do so.  The test came while grocery shopping! I laid her on the floor, hovered over her, fervently praying in quietness, as I attempted to shut out the glare of the people. From that day on, when out in public, she listened without requiring such severe restraints.

“And Jesus answered and said to them, ‘Have faith in God.’  For assuredly, I say to you, whoever says to this mountain, ‘Be removed and be cast into the sea,’ and does not doubt in his heart, but believes that those things he says will come to pass, he will have whatever he says. Therefore I say unto you, whatever things you ask when ye pray, believe that you receive them, and you will have them.”

The Lord had given me the courage I needed to face the giant of fear, reminding me of the Biblical account when David faced Goliath – he believed God for the victory.  During the past ten years of Anissa’s life, I had witnessed over and over again His Excellent Grace, thus enabling me also to believe for a victory!

To take a virtual tour of the retreat center go to http://www.wellspringhealingretreat.org