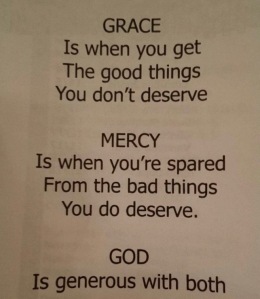 Like most, I have been the recipient many times over of God’s excellent grace and I will share an example here today. Grace comes in all shapes and sizes and I have experienced much of both.  This story is about about my sons,  Micah and Jesse. I was divorced when my two boys were young, so we did the weekend thing and they stayed at their mothers during the week. The divorce, as most do, took a huge toll on all involved, the boys were feeling in the middle and struggling with the whole thing.

I was a strong Christian at the time, but I daily worried that due to some of my own struggles that they would not have interest in “My Jesus”. 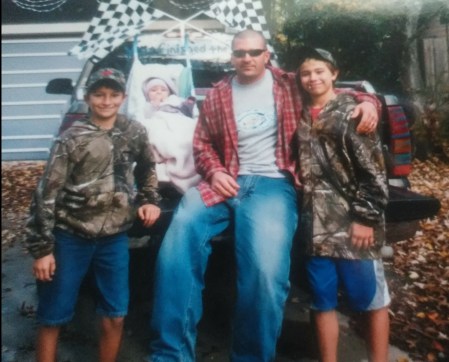 My boys were not exactly seeing me “walk the walk” all the time, and even though we were in church almost every Sunday, and I knew the word of God, I still was modeling behaviors that confused them and I was worried they would reject Christ when they were a few years older just because of what they saw in me. But I prayed all the time for the healing of memories for them, and for the breaking of generational curses of addiction that had come from up my family line. I just hoped somehow through my mess they would see a message and through my tests, they would see a testimony. Despite my struggles I had seen miracles and knew the power of God.

I knew that they needed to experience God for themselves and prayed often that God would reveal Himself to them so no matter what they had seen of me in my past they would come to the Lord because of their own experiences. That prayer was answered in both my boys lives on one occasion after a church service. They were maybe 10 & 8 years old. I had decided to stop at the Chinese place by the beach on the way home and eat some lunch. On the way. I asked my son Micah what he learned in Sunday school. He said “We learned about God’s favor, and how we Christians can have it.” I was happy to hear he was learning good solid biblical teaching. I was not, however, prepared for what was to come next.

As we pulled into the parking lot, Micah looks over to me and says, “Hey dad, lets pray for favor in the restaurant!” “Huh?” I was struggling for an answer and I thought he would forget in a minute. Nope. As we parked the truck he looked over at me again and said “What about the favor? Pray for it dad!” I was up against a wall. By now my younger son Jesse had become intrigued with this whole favor thing, and was also staring me down for an action prayer.  I said, “You know son, God loves the prayers of the little children! You should pray!” It wasn’t that I was afraid to pray, I just could not think of how God could give us favor in a restaurant.

So Micah said a short prayer like “Dear God, please let us have some of your favor in here, Amen.” Precious – Yet very scary to me. What could possibly happen? We would each be given an extra fortune cookie? I just could not see it but I had no choice. His childlike faith was expectant. I was so encouraged by his faith but did not want him to be let down.

In this case, it was me with the little faith. While I doubted and worried I was about to see a life changing experience for my two boys that to this very day they recall vividly. It set a foundation for their faith and it was the answer to my prayer that they would both experience God. To me, I know also God was dropping some Excellent Grace on me because what happened was exactly what I wanted, a personal experience for them.

So here is what happened the moment we left the truck after the prayer; I opened the door for them to walk in and we waited about three minutes for the hostess. I was still more frustrated than a hornet trapped in an old Coke can, just trying to imagine what favor we could get before we left. The hostess came and grabbed three menus and asked us to follow her. We walked to the table she stopped at, waiting for her to lay the napkins or whatever down, and let us be seated. She didn’t do that though. Instead, she took a glance at all of us with a very serious look on her face, and then she reached around me to tap Micah on the shoulder.

Obviously curious what was going on, I totally stuck my face right in the way to hear what she was to say to him. What business does she have with my 10-year-old? She proceeded around me and looked Micah dead in the eye and serious as a heart attack and said. “Sugar, you are eating for free today!”  No reason, rhyme or even explanation!  She just walked away as if nothing unusual had taken place.

I was kind of numb about it at first thinking only of  how come she picked him. Duh, she picked him because he prayed with the faith of a child for favor and sure enough he got it. That incident was one of the most powerful testimonies my kids ever saw and we still talk about it once in awhile today. Not only did God grant me answered prayer about my children not running from Him, but He went further and straight up did a miracle for a 10-year-old who asked for it. Simple, simple faith it was.

To this day I count that incident as a shining example of how God gave me something I  did not deserve, a miracle for my boys to see that solidified their faith in God at a very young age. It may not work the same in every situation, but it did that day, and I needed a second chance for their faith to not be crushed by past circumstances. To this day, now in their 20’s, they are both grounded and rooted in the Christian faith. I am so very grateful God showed up and showed off with His Excellent Grace on that day.

13 thoughts on “Guest Post – God’s Excellent Grace – When The Chips Are Really Down!”